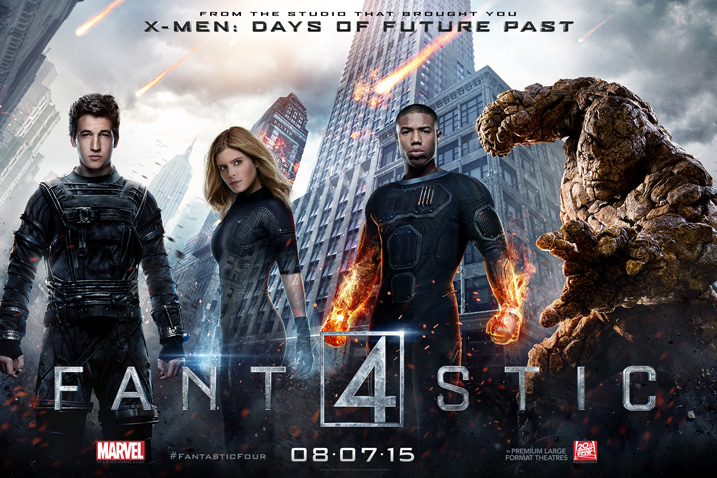 "With great power comes great responsibility" was the line uttered by Ben Parker in Sam Raimi‘s "Spider-Man" and it has unofficially become the mantra of almost every superhero movie that has followed. Whether in the grim and grounded Batman films of Christopher Nolan or the more popcorn entertainment oriented sphere of Marvel‘s cinematic universe, heroes have grappled with how to answer for the repercussions their powers have on the people and world around them. However, in Josh Trank‘s "Fantastic Four," the director aims to flip the idea on its head. “Chronicle" was all about the discovery and evolution of those powers. With his new film, as he said earlier this year, Trank answers the question, "What if it’s a couple years later and it sucks? ” It’s an interesting concept, and one that actively rejects the superhero template that has become de rigeur as the genre has become mainstream. However, in turning his back on the familiar tropes of blockbuster comic book movies, Trank doesn’t have a clear new identity for "Fantastic Four" to distinguish itself with, and the result is a movie rich with possibilities, but trapped in the basic structure of a superhero movie, with no idea of how to wholly circumvent traditional expectations.

In the early stages of the film, there is a much clearer sense of the kind of movie Trank was possibly looking to make. The opening of the film centers on the budding childhood friendship of Reed Richards (Owen Judge/Miles Teller) and Ben Grimm (Evan Hannemann/Jamie Bell), the former a dorky genius nerd, the latter just trying to survive his dysfunctional family who literally live in the junkyard that doubles as their business. There is a sweet Amblin-esque feeling of wonder as the pair tinker in the garage on Reed’s teleportation machine, which uses a stack of Nintendo 64s to help give it some power. Their initial experiments fail, but fast forward to high school, and the pair have managed to make it work, and their science fair presentation captures the eye of Dr. Franklin Storm (Reg E. Cathey) and his adopted daughter Sue (Kate Mara), who are impressed to see that Reed and Ben have succeeded, where their own similar experiments have failed. Reed is recruited by Franklin so they can combine their efforts with proper funding, while Ben seems cool to go back to the junkyard and awkwardly disappear from the movie for a while. But all through these scenes, there is an endearing earnestness, and an overall feeling that more resembles an underdog sports movie, than your standard summer movie. It’s slightly, if briefly, refreshing. 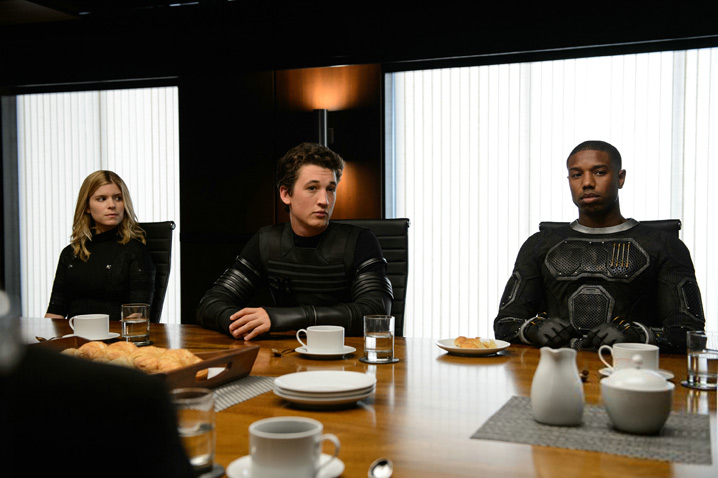 However, it’s from this point on that "Fantastic Four" slides alarmingly and dully toward the usual spandex superpower movie. Trank tries to tweak the origin story ritual by spending a lot of time with Reed, Sue, her newly recruited brother Johnny (Michael B. Jordan), and formerly exiled Victor Von Doom (played by Toby Kebbell, and who, even if you aren’t familiar with the comics, you know will become the villain not just because of his name, but also because he casually mentions that perhaps Earth doesn’t deserve to be saved) as they work on building a professional grade teleportation machine, one that doesn’t require video game systems or scrap metal to get started. This section of the movie plays as the most expensive production of "How It’s Made" ever, and while Trank’s choice to go down this is path is potentially intriguing on paper, in execution, we learn very little about the characters given the lengthy amount of time we spend with them. Moreover, they aren’t given much in the way of complexity.

From here, Trank makes another interesting decision, that yet again, is truncated in its execution. Anticipating that the audience will already know that following a freak accident Victor will be left stranded in another world on Planet Zero, and that Reed, Sue, Johnny, and Ben (brought back into the fold) will become imbued with special abilities, the story jumps forward a year. Wisely, we don’t get the routine montage of the quartet learning how to use their new skills. Instead, they are now honing their talents, and true to his word, Trank makes them reluctant partners in military research, striking a deal to assist the U.S. government in turn for efforts being made to find them a cure. The fact is that the story of these four, whose ultimate goal is to reverse what has happened to them, has some avenues to go down that could’ve been thought-provoking, but the narrative waters start to get muddy as "Fantastic Four" heads into its third act. 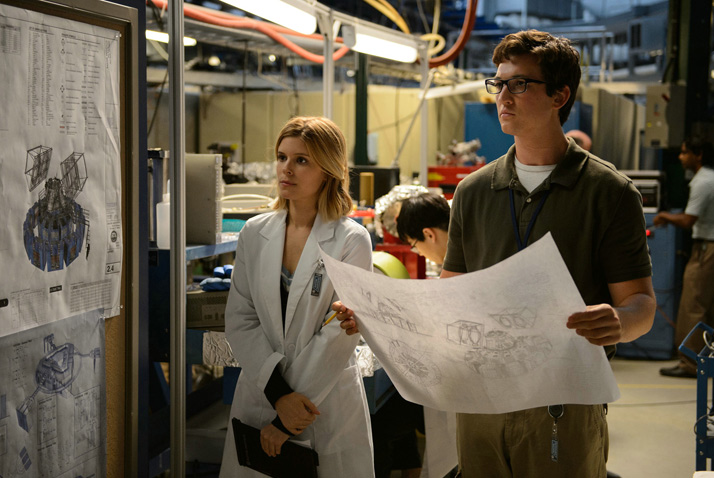 There is a sense of panic that is palpable in the film’s final twenty minutes or so, almost as if executives at 20th Century Fox looked at the first two-thirds of Trank’s film and, realizing he had bucked convention (unsuccessfully), swung the entire movie towards a digital effects heavy conclusion. Clunky one liners, where there weren’t any before, abound, a pixel heavy battle ensues, and there is a closing scene that is so misjudged and obnoxiously calibrated to hand hold the audience to embrace a new franchise, it had the critics at my screening derisively laughing at the screen.

Indeed, while the details may be up for debate about the extent of the rumored trouble on the set of the film, "Fantastic Four" is certainly a muddle of competing visions. Trank, producer Simon Kinberg, and Jeremy Slater ("The Lazarus Effect") are all credited with the screenplay, but it hardly feels like they were in the same room at any one time. For all of Trank’s desires to create a movie that’s antithetical to the common assumption of superhero picture, it’s contrasted by distractingly numerous scenes of dialogue, mostly by Franklin Storm, underlining one of the film’s few thematic ideas about the power of cooperation and working together. And these monologues are written with such simplicity it feels like they’re aimed at small children, so they can walk away with a wholesome lesson. And yet, no parent is going to want their kid to watch a movie that has some surprising scenes of blood spattering deaths. 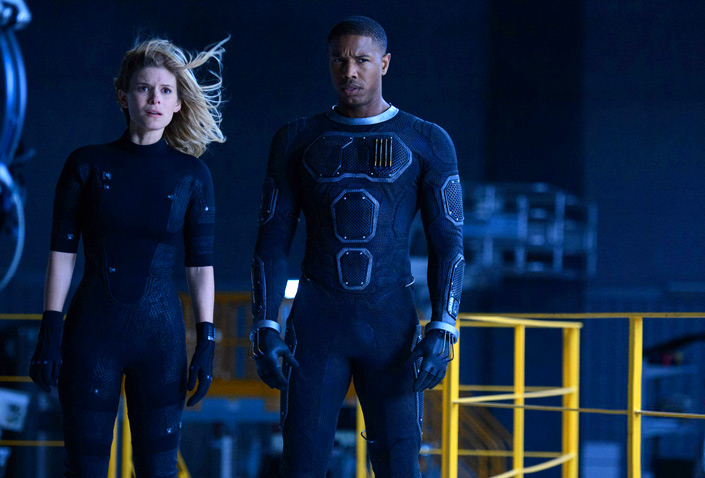 However, it seems at a certain point that with a release date to hit and only so much they could do without pushing the movie back, 20th Century Fox just threw up their hands and cobbled together what they had. The special effects are often lousy in "Fantastic Four," with poorly rendered CGI backdrops that make the fact that the actors are all standing on a soundstage all the more apparent, and this is particularly glaring during the climax. And while the film wisely doesn’t make any connection to any other comic book movies, the stage setting for a followup is simply unimaginative, feeling like a warmed over idea from Marvel Phase One.

There is a constant debate among comic book and industry observers about whether or not a true auteur driven effort could or should be implemented in expensive superhero movies, or whether a studio, or someone like Marvel guru Kevin Feige, has a right to dictate a particular artistic direction. The answer, of course, is that a compromise that is satisfying to both parties is the ideal resolution. And if anything, "Fantastic Four" is an example of what happens when a director and studio are clearly not working in sync. Often out of alignment, and missing a clear creative guiding vision, "Fantastic Four" is not ready for the multiplex battle ahead. [D]

Connect with The Playlist